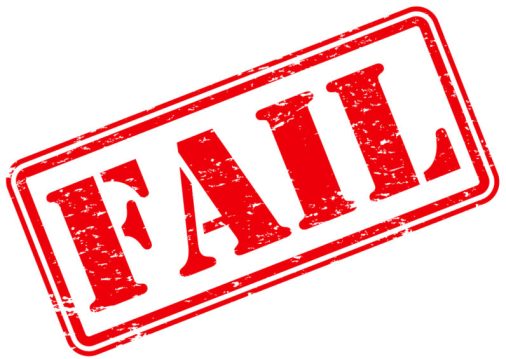 Yesterday, I experienced quite a fail. Like, flat-on-my-face-everyone-saw-it-and-there-was-no-way-of-looking-cool-while-doing-it kind of fail.

I was asked to rap at my church during worship for the song “Oceans”. I was souped because my wife was leading that song so it was our first time spitting fire together. It was gonna be lit.

So I wrote the bars. Practiced them. Internalized them. Slept with them. And then when it came time to actually perform them, God asked me to take it to another level. Normally when I have to perform, I have the habit of running through my parts in my head during worship. But this time, God was like, “Nah, bro. I got this. Just worship.” So I was like, “Alright. You got it.” And I just worshiped.

I was slotted in to do 4 services and I did the same thing all 4 services. Worship. Spit. Fire. Repeat. And all was swell and well for 3 straight services. Until…everything went south.

I hopped up for the final service, dropped my first few bars, and then I blanked.

My mind literally stopped working and I forgot every last word.

And the music kept going.

And the people kept staring.

And Emmanuel kept standing there in dead silence.

Seconds passed and all I could remember was my last line, which was “You’ve never failed before so You won’t start now.” So I said it, sat down, and basked in a boiling hot pot of irony.

Now here’s where things got interesting.

In the past, that would’ve destroyed me and I would’ve most definitely cried. But I was surprisingly relieved and it felt incredibly freeing to fail that epically. But nevertheless, I couldn’t help but wonder about the irony of that last line. Had God failed me?

I did everything right and it still didn’t work out. Was God trying to humble me? Was the Enemy trying to sabotage the service? Was there sin in my life?

So you study really hard and pray to pass your exam and you fail. It’s God’s fault. Or Satan is trying to thwart your plans of academic world domination.

So when you do everything right and pray that God makes everything work out, there’s no guarantee that He’s going to do what you want. And if He doesn’t, you can’t blame Him.

So why did I mess up so epically in front of my whole church even though I thought I did everything right? Because I’m human. And humans mess up.

God doesn’t fail. We just live in a world where He leaves room for failure to happen. So much room that it sometimes looks like He’s the one who fails.

So the next time you have all your ducks in a row and all the ducks suddenly die a random horrible death, don’t stress blaming God, Satan, or yourself. Realize that sometimes, crap happens. And ducks die.

And in a weird, almost masochistic way, that can be really freeing.