One of the cool things about living in such a dark world is that it makes it obvious where the light is. So when things like Fifty Shades of Grey come out, instead of being offended or scared, I think the same thing we thought when we saw what Mcnuggets are made out of…

I’ve learned a lot from E.L. James(I haven’t read the books or seen the movie.) because she makes it wonderfully clear what life is supposed to look like. So here are 4 reasons I love Fifty Shades of Grey.

Reason #1: Christian Grey is Exactly What Men Should Be Like

Christian Grey has soul-gripping confidence. He can walk in and command the attention of everyone in the room. He knows who he is and makes no apologies for it. The key to confidence is being yourself. I read a quote recently that’s been tattooed to my mind for weeks: “Be yourself and let the world feel the weight of who you are—let them deal with it.” So men, be yourself and make no apologies. Unless you’re a jerk. Or a sociopath.

Christian Grey also knows how to take charge of things. He’s a man who knows what he wants and goes after it relentlessly until he has it. Too often men will sit back and let life pass them by. We want something: a job, a position, a six pack etc. and we sit there twiddling our thumbs, hoping that our dream will come falling into our laps one day. Unfortunately, life doesn’t work that way and we have to put in work to get what we want.

In addition, we were born to lead, but when the time comes to lead, too often we’ll run from our responsibility because we’re afraid of failure. Take charge, dive in—fail as quickly as possible and success will follow soon enough.

Christian Grey has a pretty good job. Actually he has more than a job—he’s a billionaire and he’s not even 30. Now, not every man needs to be a billionaire, but money’s always a good thing to have.

Reason #2: Christian Grey is Exactly What Men Should Not be Like

He’s also extremely controlling, to the point of regulating everything Ana eats, who she’s friends with and where she lives. Men don’t control their women—it’s just a sign of massive insecurity at best and narcissism at worst. Real men let women—their girlfriends, wives, sisters and friends—express themselves and be themselves just the way God made them to be.

Reason #3: Anastasia Steele is Exactly What Women Should be Like

Ignore that reason you just read. I really couldn’t think of much for this part—believe me, I tried. So I just have pictures.

She was still a virgin, which was nice. I would love to say that this was because she had such a strong view of her own self-worth, but that would be lying.

She trusts Christian…and trust is a good thing, I guess. Unless the man you trust tells you that he wants you to be his slave…

Reason #4: Anastasia Steele is Exactly What Women Should Not be Like

Ana ignores all sorts of red flags that signal that something’s wrong with Christian Grey. He stalks her, constantly threatens her and keeps telling her that he doesn’t want to love her and just wants her to sign a sex contract. To any other person on the planet, this would translate as, “I am a domestic violence case waiting to happen. Run while you still can.” But all Ana hears is, “I can change if you love me enough.” Which leads us to point number two…

She thinks she can change him even though he’s clearly deranged. Ladies, if you’re dating a guy because you think that you can change him, don’t bother. Only God can change people. So let Him work on that man and when He’s done, He’ll bring him to you. But until then, leave this joker alone.

She also thinks that this is real love—despite the fact that he makes it clear that all he wants to do is make her his sex slave. Ladies, a guy will wait days in the freezing cold with no food, shower or extra clothes just to get a pair of Jordans. If he can’t wait until marriage to have sex with you, he doesn’t love you. Leave him alone. 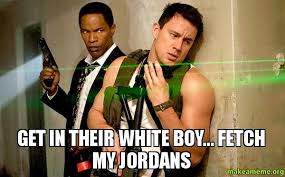 Let’s get straight to the point here. Ladies, do not let any man have his way with you. You have too much value to let anyone degrade you to a sexual object. You’re beautiful, unique and worth dying for. Do not lower your standards to anything short of royalty. If you meet a man who can’t treat you like the queen you are, leave him.

And for making it this far, here’s a beautiful poem about everything that is amazing about you.